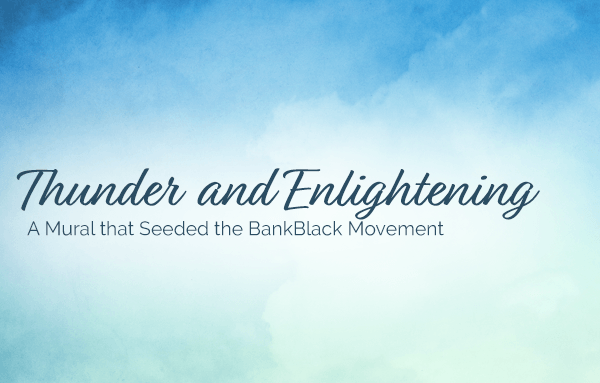 Thunder & Enlightening, A Mural that Seeded the BankBlack Movement

As the largest Black owned bank in America, OneUnited Bank undertook this historic and, quite frankly, risky project to bridge the divide between the banking industry and the Black community. We hoped that illustrating the realities of urban communities on a federally insured institution would open minds to the potential for banks and the Black community to work together in new and different ways. The “seed” planted by the mural has bloomed into a national movement – the #BankBlack and #BuyBlack movement.

The Black community is not only moving their money to Black owned banks, but also “moving their minds” to better support Black owned businesses. For example, many senior citizens have walked into our branches and stated it was the first time they had ever been in a bank. Previously, they did not feel welcomed. Many customers have stated that for the first time in their lives, they are excited about banking. The conversations on social media have included financial literacy and discussions that directly confront the discredited adage that “their ice is colder” or the incorrect belief that Black businesses are inherently “less than.” The Black community is now focused on collective economics and community wealth building in unprecedented ways. They are taking the BankBlack Challenge! In 2017, the BankBlack Movement is stronger than ever with over $50 million in deposits moved to Black owned banks in just 12 months.

OneUnited Bank is also evolving. We launched an online second chance checking program for people with ChexSystems records, which is one of our most popular services. We expanded our Contact Center and social media teams, upgraded vendors and increased our staff by 10% to better serve our customers. We expanded our annual “I Got Bank” financial literacy contest for youth to include essays and art and increased the selection of winners from 3 to 10. We also expanded our loan capacity through our secured credit card program, to help rebuild credit, and through home loans to expand homeownership with partnerships with first time homebuyers programs in Boston, Miami and Los Angeles. We also developed our partnerships with BankBlack USA, BMe Community, the African American Film Critics Association (AAFCA), BLACKOUT Coalition and others to support the #BankBlack and #BuyBlack movement and support financial literacy.

We know that this is more than a moment, it’s a movement! Let’s take this journey together.