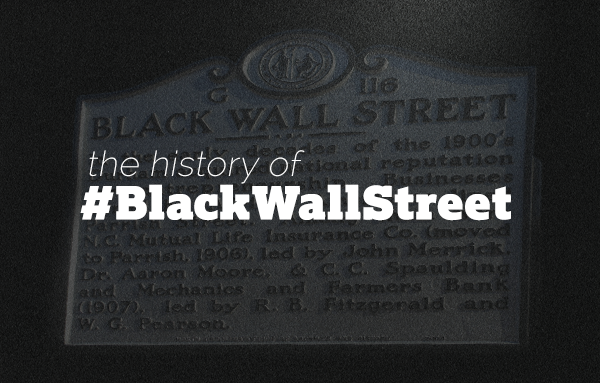 Black Wall Street has a special place in American history as a platform that paved the way for Black communities and businesses to thrive. Not too long ago Black men and women were not allowed to own property. We faced violence and freedom restrictions, such as being stripped of the right to vote, and endured other forms of racial segregation and race-based legislation. Despite this, a sense of community and faith bloomed among Black neighborhoods where isolation and segregation was the norm. Black people gave each other a place for community, safety, and economic support. A hundred years later, Black communities were thriving and economic strength was established. A perfect example of this progress was Black Wall Street, located in the Greenwood neighborhood of Tulsa, Oklahoma.

Black Wall Street was a thriving community in Greenwood in the early 1900s. This was a community that had bustling Black owned businesses, theaters, schools, social health, and a strong distribution of wealth among its middle and upper classes. Reports estimate the community had more than 10,000 African American residents, and most of them were thriving. Black Wall Street was the epitome of a self-sustaining community and strength. Black people supported each other, which allowed for easier access to resources, savings, housing, jobs, education, and health. Black Wall Street was just one of many thriving communities in the United States, but it also became a site that would serve as an example of the violence and hatred that grew out of greed from white financial interests.

As Black Wall Street thrived and grew, so did greed in oil-thirsty America. In 1897, just a few years before Black Wall Street was established, Oklahoma got its first oil well. While this discovery is praised for establishing economic wealth and stability in Oklahoma during the Great Depression, it attracted scores of exploration companies in the 1920s. This oil discovery gave Black people the economic opportunity they needed. We weren’t allowed to shop at white owned stores and businesses, so the money we spent went right back into our own communities. Oil gave rise to opportunities and economic freedoms for Black people despite Oklahoma’s status as a segregated state. As you can imagine, envy and jealousy thrived. The thought of second-class citizens receiving better economic opportunities than their white neighbors infuriated white Oklahoma residents. They retaliated against the Black community, spreading hatred and accusing them of crimes. Many white people were full of loathing and wanted to bring Black communities down.

An accusation of sexual assault was the match that ignited the smoldering hatred and resentment of the thriving Black Wall Street community. The accusation inspired a lynch mob, which included nearly 2,000 Ku Klux Klan members who wanted to get “justice.” Everything came crashing down on Black Wall Street on May 31, 1921. In just 16 hours, police had arrested 60% of Black residents living in Black Wall Street. Mobs burned Black owned businesses and homes, and murdered hundreds of Black citizens. When Black men joined forces to protect their homes, they were ultimately driven out in fear for their lives. By today’s estimates, the dreadful and murderous 16 hours caused more than $30 million in damages. The residents of Greenwood were blamed for the death and destruction, and the government made it nearly impossible to rebuild. But we can rebuild a new Black Wall Street now by working together.

The massacre at Black Wall Street was one of the largest massacres of Black citizens in America. It is important not to forget the pride and opportunity that Black Wall Street awarded African Americans. We worked hard, built a strong community, and supported each other. Circulating Black dollars within our community and doing business with one another is critical for our community’s financial and economic strength.

We have a need for that today, which is why OneUnited Bank is supporting the #BankBlack Movement. Banking Black gives citizens more opportunities than they would have anywhere else, and it puts our hard-earned dollars back where they belong – in the Black community – so we can build the “new Black Wall Street.” We owe it to our ancestors who lost their lives and community that day. Black Wall Street gave us the drive and the power to our own financial institutions and allowed Black citizens to invest in each other. We at OneUnited can make that happen again. #BankBlack