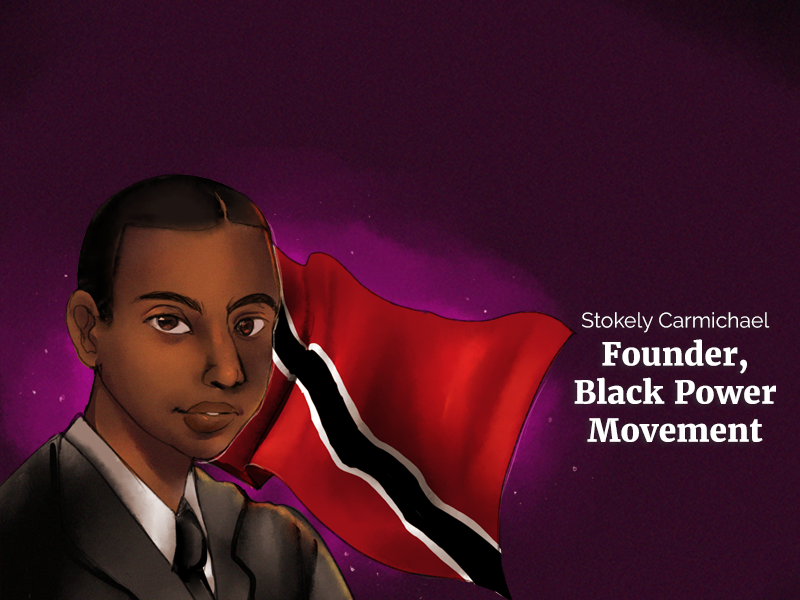 In continued celebration of Caribbean-Americans, we honor Stokely Carmichael (Kwame Ture), born in Trinidad and the founder of the Black Power Movement. According to Carmichael, “Black Power meant Black people coming together to form a political force and either electing representatives or forcing their representatives to speak to their needs…” Given #BlackOutDay2020 and the protests in support of #BlackLivesMatter during this election year, we honor Stokely Carmichael for inspiring the Black community to embrace its power and lead.

Carmichael was born in Port of Spain, Trinidad and Tobago on June 29, 1941. He came to the U.S. at 11 years old and became an activist while still attending the Bronx High School of Science and later Howard University, graduating with a degree in philosophy. He eventually led the Student Nonviolent Coordinating Committee (SNCC), taking over from John Lewis, an activist who later was elected to the US Congress. During his years at SNCC, Carmichael focused on voting rights and political representation in Mississippi and Alabama with Dr. Martin Luther King Jr., Fannie Lou Hammer, Bob Moses and others.

On June 16, 1966, Carmichael gave the first Black Power speech in Greenwood, Mississippi, using the phrase to urge Black pride and socio-economic independence. The earliest known usage of the term “Black Power” is found in Richard Wright’s 1954 book Black Power. However, Carmichael used “Black Power” as a political slogan to replace the “Freedom Now!” slogan popular at the time. Carmichael felt the movement was not just to end racial desegregation, but rather to unite the Black community to end systemic racism. He first coined the term institutional racism in 1967 with Charles V. Hamilton in the book Black Power: The Politics of Liberation, noting that while individual racism is often identifiable because of its overt nature, institutional racism is less perceptible, but no less destructive.

Even after the Black Power movement declined in the late 1970s, its impact continues to be felt for generations. With its emphasis on Black pride and self-determination, Black Power influenced everything from popular culture to education to politics. The legacy of the Black Power movement lives on in the Black Lives Matter movement and Black Out Day 2020 with our efforts to combat systemic racism and social, economic and political injustices.

By 1970, Carmichael (who later changed his name to Kwame Ture) moved to Africa. For the final 30 years of his life, he was devoted to the All-African People’s Revolutionary Party (A-APRP). Ture helped form the A-APRP with the goal of putting “Africa” on the lips of Black people throughout the diaspora, believing that many did not consciously or positively relate to the African homeland of their ancestors. He worked for most of his life to significantly raise international Black consciousness of Pan-Africanism.

Kwame Ture died from prostate cancer on November 15, 1998 at age 57 in Conakry, Guinea.

Black power can be clearly defined for those who do not attach the fears of white America to their questions about it.

Now, then, in order to understand white supremacy we must dismiss the fallacious notion that white people can give anybody their freedom.

Our grandfathers had to run, run, run. My generation's out of breath. We ain't running no more.

I knew that I could vote and that that wasn't a privilege; it was my right. Every time I tried I was shot, killed or jailed, beaten or economically deprived.

There is a higher law than the law of government. That's the law of conscience.

`{`There's`}` individual racism and institutional racism. The first consists of overt acts by individuals, which cause death, injury or the violent destruction of property. This type can be recorded by television cameras; it can frequently be observed in the process of commission. The second type is less overt, far more subtle, less identifiable in terms of specific individuals committing the acts. But it is no less destructive of human life.

Reorientation means an emphasis on the dignity of man, not on the sanctity of property.

White liberals are always saying, ``What can we do?`` I mean, they're always coming to help black people. `{`...`}` they say ``Let me help you,`` and what they mean is ``help you adjust to the situation with the man who has the gun on you.`` If indeed white liberals are going to help, their only job is to get the gun from the man and talk to him, because he is a sick man. The black man is not the sick man, it is the white man who is sick, he's the one who picked up the gun.

The creation of new values means the establishment of a society based on free people, not free enterprise.