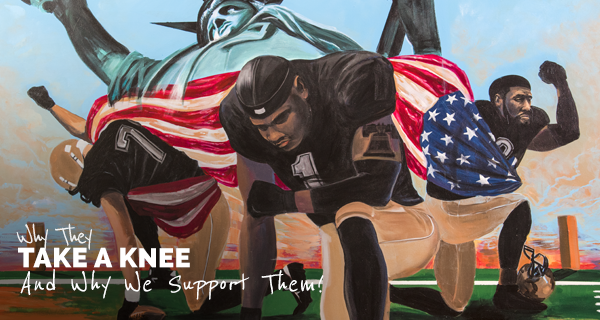 Why They Take A Knee and Why We Support Them!

In an unprecedented move by a financial institution, OneUnited Bank, the largest Black owned bank in America, unveiled the “Take A Knee” Campaign with a stunning masterpiece, Last Man Standing, by internationally acclaimed artist Addonis Parker. The protest art, unveiled on October 25, 2018, evokes the importance and burden of activism in America, featuring three football players kneeling during the national anthem. The Take A Knee Campaign is a nod to the national #TakeAKnee movement started by Colin Kaepernick and followed by over 180 football players including Eric Reid and Kenny Stills in which they refused to stand during the national anthem and instead took a knee in silent protest against police shootings of Black people and the need for criminal justice reform.

With all the media attention about the #TakeAKnee movement, the underlying reasons for the protest gets lost. OneUnited Bank supports the #TakeAKnee movement because, as the art showcases, these men recognize the Black community is in distress. The fight for freedom and justice is being carried on their back, as it has historically been carried by many activist athletes such as Muhammad Ali, Tommie Smith and John Carlos. These athletes #TakeAKnee in protest against police shootings of unarmed Black people, mass incarceration, income inequality, voter suppression and overall injustice. Throughout history, art has been used to raise awareness about social issues and affect positive change. We are honored to unveil “Last Man Standing“.

And as the largest Black owned bank in America, we also know that economic progress and social justice are intertwined. The OneUnited Bank Take A Knee Campaign takes the #BankBlack and #BuyBlack Movement to the next level. We will donate to the American Civil Liberties Union or ACLU and to BMe Community, in honor of Leon Ford, a BMe Community Genius who is a survivor of police brutality, for each new customer that opens a checking account between October 25, 2018 and December 31, 2018. The Bank will also extend an invitation to all OneUnited Bank customers to become a member of the ACLU and donate to BMe Community.

For more information on how to participate in the Take a Knee Campaign visit www.oneunited.com/takeaknee.