Refugee vs Evacuee. Katrina vs Harvey… and Why it Matters 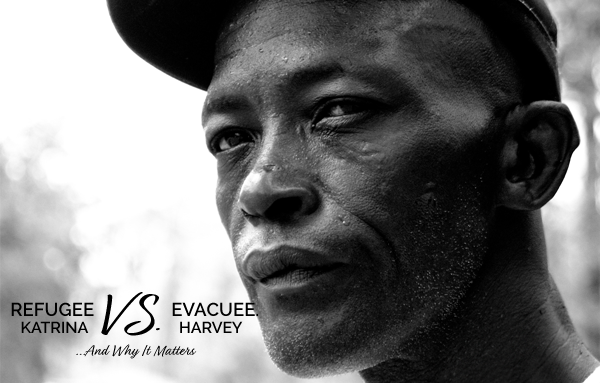 Refugee vs Evacuee. Katrina vs Harvey… and Why it Matters

This week marks the 12th anniversary of Hurricane Katrina. Amazingly, it has been 12 years.

Sadly, Hurricane Harvey has had a similar devastating impact on Houston that Katrina had on New Orleans. Our thoughts and prayers are with Texans. We are inspired by their resilience and community spirit as they rescue and support each other through this natural disaster. As many have said, we’re experiencing the worst of Mother Nature and the best of human nature.

Post Katrina, the way in which we experience and process natural disasters is very different. Today, there’s social media and smart phones. We’re now all connected. Many have been rescued due to the power of social media.

And we continue to learn valuable lessons from Katrina and other hurricanes that improve the way we handle natural disasters. Sylvester Turner, the mayor of Houston, made the astute decision not to order a mandatory evacuation of Houston and risk having over 2 million people on the road when Hurricane Harvey hit. Given the flash flooding that has occurred, the decision not to evacuate was a smart one.

So why are Houstonians being called “evacuees,” while the people of New Orleans were called “refugees?*” Hmm.

The answer to that question matters. The way in which a community is perceived has implications beyond the singular words. It can impact the way the community perceives itself as well as how others view it. More importantly, the perception of a community can impact the level of resources which are made available to it. Yes… social, political and economic empowerment are intertwined.

OneUnited Bank, the largest Black owned bank in the country and first Black internet bank, made the strategic and conscious decision to focus on the positive experiences in the Black community on our website and through social media. The reality is that the Black community has more accomplishments than presented through mainstream media. By sharing more positive experiences, OneUnited provides a more realistic – and improved – perception of the Black Community. We also give our community the respect we deserve.

We know that challenges – like natural disasters – may not be avoidable. Yet challenges should not result in a loss of dignity. By working together, we can lift each other up as we see happening in Texas!

We hope you agree… and join the #BankBlack Movement today.

*Based on the definitions, “evacuee” is the right description for all:
Refugee:  A person who has been forced to leave their country in order to escape war, persecution, or natural disaster.
Evacuee:  A person evacuated from a place of danger to somewhere safe.